Spring is finally upon us and that can only mean two things, that summer is right around the corner and the season for exotic cars is finally upon us. The weather in our hometown of Keene, NH has been absolutely beautiful all week, with the exception of one rain day, and everyone is very happy to see winter on it’s way out. We also had ourselves a great weekend, we finally sold the green Austin Healey that we had posted in our classifieds. Gary met the buyer at the Sports Car Services garage Saturday and finalized the deal and they will be picking it up in the near future. They will now be able to enjoy a beautiful English car all season long that was well kept and in spectacular condition.

We’ve gotten a new customer car in this week as well, a red 1963 Jaguar E-type Series I, here for a

basic check-up, the list is growing but nothing too serious.  The Jaguar E-Type is a British sports car, which was manufactured between 1961 and 1975. Its combination of high performance, competitive pricing and elegance established the 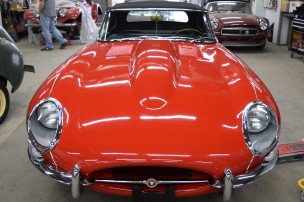 model as a staple of the motor vehicle industry. At a time when most cars had drum brakes, live rear axles, and mediocre performance, the E-Type burgeoned on the scene with 150 miles per hour for a top speed, and 0 to 60 mph acceleration time, monocoque (structural skin) construction, disc brakes, rack and pinion steering, independent front-end and rear-end suspension and unsurpassed looks. The interior of the E-type is beautiful and the body and mechanics of the car, in general, are in great condition and nothing too serious is wrong with it. The check-up is specifically focusing on mechanical aspects and Mike has been working for the better part of the week diagnosing what is necessitated with it from basic wear and tear. He’s also going to be re-tuning the triple carburetor system and there is a small issue with the driver’s side caliper, which is causing it to stick, and the best option for that is to rebuild the caliper in general, both of which are lost art forms that not many garages will do.

The Crosley is still here in the Sports Car Services garage and should be making its trek home shortly. Everything that we were asked to fix on it has been done, and its running great now.  We did not fully restore this car and there is still plenty of work that could be done on it, but we at least got it on the road.  A fully restored basic Crosley is worth anywhere from 10 to 15 grand.  A Crosley H-Mod classic racer , on the other hand, is worth much more, anywhere from 25-35 grand.

We also have a very cool ’61 MGA Mark II on our hands as well. This Mark II is going to 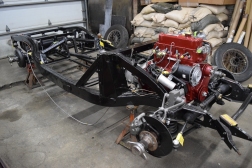 eventually be fully rebuilt from the frame up. The MGA Mark I replaced the MG TF 1500 Midget (like the one I wrote about a few weeks ago) and represented a complete style change from MG’s earlier sports cars, the Mark I was of course eventually replaced by the Mark II. Announced on September 26, 1955, the car was officially launched at the Frankfurt Motor Show. The MGA design dates back to 1951 when MG designer Syd Enever created a streamlined body for George Philips’ TD Le Mans car. The problem with this car was the high seating position of the driver’s seat because of the limitations of using the TD chassis. A new chassis was designed with the side members further apart and the floor 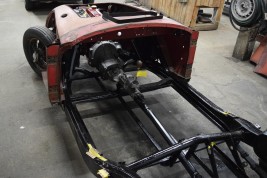 attached to the bottom rather than the top of the frame sections.  Road & Track magazine reviewed the MGA Mark II in the September 1961 issue and reported a top speed of 105 mph and a 0-60 acceleration of 12 1/2 seconds. The frame on the MGA Mark II that we’re working on is just like brand new, the engine is in mint condition and has been rebuilt to standards of a brand new engine and the drive-train, as well, is in very good condition. Albert spent a good part of the week running brake lines, as well as fuel lines for it, the next step will be to finish the body.

Jason and Rod are still busy in our brother shop, G&R Autoworks LTD, getting the Jeep rebuild finished. There has been a lot of modifications on this project. Utility boxes have been added all around it as well as a new winch. That isn’t even half of it though, they have Installed new ball joints , the front axle U-joints, replaced both front axle seals, full E-brake service requiring a redesign to the original automatic adjusting system that everyone complains about, installed new wheels and tires, installed headlights. The list is just starting to grow and who knows what else we’ll be modifying next.